It’s 3:45 … in the actual morning … on a Sunday … and my brain is really trying to understand why my alarm is going off.

And has been going off … repeatedly … for the last 45 minutes.

Because I know me, so last night I did this… 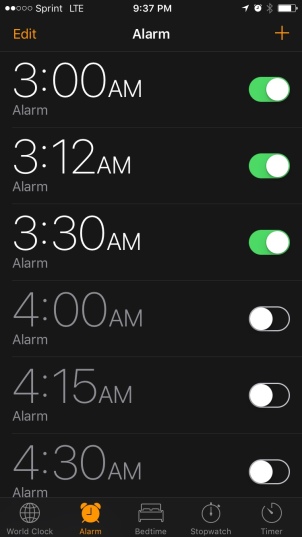 Why do I keep saying yes to these people?

And why don’t I have warmer clothes?

And why don’t I live in Hawaii?

I’m only doing this because I promised my double training partner that I would.

Yesterday, she made me run 21 miles, including that Mountain Junkies wazUPwidis stair challenge. That involved something like 1,000 or 5,000 or 10,000,000 stairs throughout 3.1 miles of Downtown Roanoke. 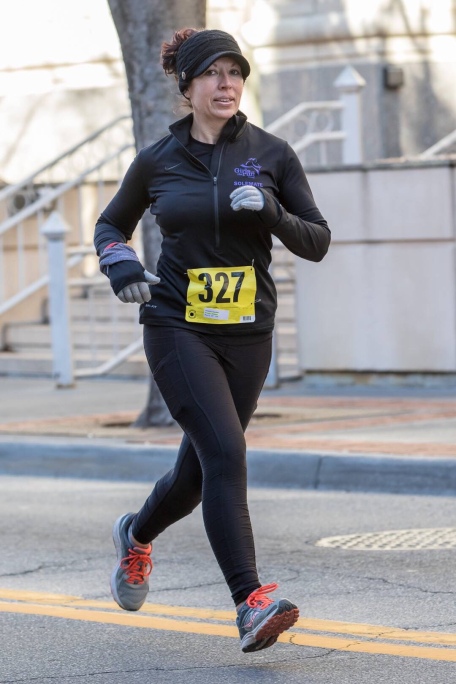 So, here I am, waking up at 3:45 in the everloving morning, trying to decide whether or not to eat or coffee or go back to sleep before I run … or how much I really even like my double training partner.

I opted for some oatmeal, threw on some clothes and lights, and headed out the damn door.

Let me tell you, life gets creepy as hell in the dead quiet of 4am on some back country roads. I’ll take the muggers and flashers of city streets over the creepy unknown of the backwoods any day. This is where the bigfoots and chupacabras live. And you know this is how the serial killers get the Runners. They always find us on the back wooded roads where the police won’t find your body for months. Years. And can skunks have rabies? Plus, it’s starting to snow. Or is that ice? It’s getting colder. It’s definitely getting colder. And is that a car? Why is there a car driving out here at 5 o’clock in the morning? Serial killer. Obviously. This is how it ends. They better bring Shemar Moore back for my Criminal Minds episode. Or did he come back already? Is that show even still on? If I’m gonna be killed by a serial killer, they damn well better put me on tv. Except, nah. I’m pretty sure I can take a serial killer. I’m ready. Psht. I wish a serial killer would… Wait, no. Nope, that’s a newspaper. He’s delivering newspapers. He’s just a newspaper delivery dude. Probably still a serial killer in his downtime, though. Or stalker. At least now I know his routine. I’m good as long as I’m out before 4am. No, it’s definitely ice. Maybe snow. Cold. Has the temp dropped, what, like, 15 degrees since I’ve been out here? Why? Do I have enough light? Could a tractor trailer truck see me if one drove by? I need to get to Fleet Feet for more reflective gear. Why would a tractor trailer be out here on a peninsula. This a peninsula, right? Can lakes have peninsulas? Or are they fjords? Wait. No, they only have fjords in Finland. Right? What the hell is a fjord? How do you spell it? How much longer do I have to do this? I need a bathroom. Oatmeal was a mistake. If I just stopped on the side of the road, no one would really know it was me that did it. The sun’s not going to be up for hours. I’d need to turn off my headlamp, which I’m pretty sure is the only thing scaring the chupacabras and bigfoots away. Better not chance it. Plus, serial killer stalker newspaper delivery dude will probably be swinging back by here any minute. Wait. Why hasn’t serial killer stalker newspaper delivery dude come back out of the hood? Victim? I bet he found a damn victim and now I’m going to be a witness and I’m going to have to remember license plates and they’re gonna ask me about car makes and models and years and colors and I don’t know…black? Was it black? Maybe dark grey? Or is it gray? What is the actual difference between grey and gray? Is there a difference? I mean, there has to be. Why would they make up two random different ways to spell a word that means the same thing? Breath. Breathe. Wait. Which…My love, I’m hungry. I should have had more oatmeal. Coffee. How much coffee did I prep? I’m sure it wasn’t enough. Should I start it before I get in the shower? If I do, it will be ready as soon as I’m dressed so I won’t have to wait. But then, what if I want to spend more time in the shower and then the coffee gets cold? I shouldn’t spend that much time in the shower, though. Well water runs out eventually. And resources. It’s not good to waste resources. Are we running out of water? That Nestle dude wants to own the world’s water supply and charge for it. Is that true? I saw an interview, but he doesn’t speak English. And I don’t speak Finnish or Russian or whatever language he was speaking. He might have been saying he wants to house all the world’s orphaned children. Can you ever really trust a translator? I need to learn more languages. Like, at least the top five or six. Maybe two or three. Or, really, the whole world speaks English now, right?