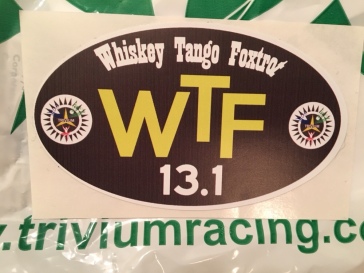 So, my girls and I did this thing today. A half marathon trail race in North Carolina. I think at some point I saw the event on Facebook and was intrigued by the name, so I clicked “Interested.” Then one of them saw the word “extreme” in the description and so obviously we signed up. Plus, I adore Tina Fey. So, obviously.

Keep in mind that a couple of us were fresh off the plague (or, pre-plague, in my case), none of us have really been on trails since Frozen Toe back at the start of January, and most of us have been training almost exclusively on mountain roads for the fast-approaching Blue Ridge.

Plus, one of us may have opted for the fettuccini alfredo as our pre-race meal last night.

(My race went similar to Michael Scott’s in this episode..)

So, sure. We weren’t really prepared for a trail half. But I feel like we were even less prepared to enter what ever level of hell we were crossing into when we pulled into Northeast Park.

I think the first tenth of a mile or so was ok. And the people were great. You can always find a friend on a trail run. And you hear the best phrases on trails.

“You should really get into the killer hole to do that.”

“My boobs are muddy.”

“The left side of my vagina hurts.”

“My GAWD, where are the freakin mountains???”

I won’t say which of those phrases actually came from my group. I will say, however, that mountain runners do not handle flat trail well. I mean, I guess some of you do, because there were a crap ton of Roanoke runners out there just a smiling and enjoying themselves. I can’t comprehend this.

Because my body spent the entire race slowly shutting down. It started in my left ankle. Then my left Achilles. Left knee. Left hip. Then it began to travel across my nether-region over to my right hip and back down the other side. There were (and still are) areas on my body that hurt for reasons I can’t really grasp.

Kim says it’s because we had to shuffle so much behind so many runners on a really flat course and we couldn’t open up and get a good stride going. I think it’s because we were circling one of the inner rings of hell.

Actual footage of me at mile 12:

Plus, it was hot. In February. In running skirts and tank tops. So, when we hit the two water crossings, it was all I could do not to simply lie down in the ice cold water and try to numb everything below my waist.

But by the time we finished, it was overcast and breezy and we had clearly just escaped hell only to find ourselves in some sort of artic vortex. We spent about thirty minutes post-race huddled barefoot under the hand dryer in the bathroom, which was totally sanitary and not at all creepy and we didn’t panic even a little bit when one of the toilets began overflowing out into the sink area. 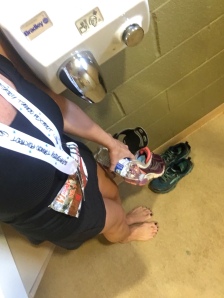 At one point, Norma seemed to be under the impression that I had to get back to Roanoke quickly to get a long run in tonight. I’m not sure what sadistic individual told her this blatant lie (I suspect she’s tiny and Brazilian), but my current condition will not allow me to get back up off of my couch. My ankles are no longer bendy. And the tops of my feet keep cramping in the most vicious way. I think there’s a pretty good chance that my hips will never operate in any kind of real feminine way again, so there goes my dating life. And while I don’t think I can actually get up off of the couch right now, it is also incredibly uncomfortable to sit. I mean, my butt hurts. Not my glutes, mind you. My actual butt. I just don’t even understand.

This race violated me in ways that may require significant counseling. Whisky. Tango. Actual. Foxtrot.

So, Whiskey Tango Foxtrot is an appropriate name for a race that I will never, ever run again. WTF, indeed, North Carolina. Y’all need some damn mountains.

And now I have to try to get my knees back on speaking terms with me again. I feel like they’re gonna want chocolate.