Except that sometimes I get a little too into them.

I think it has something to do with my brain’s susceptibility to the power of suggestion. And peer pressure. I’m reeeeeally susceptible to peer pressure.

A certain redhead suggested we run the High Bridge Ultra in between the Chicago and Marine Corps Marathons this fall. As the name might suggest, this run involves a high bridge. A one mile long bridge that’s really high up. If you Google it, this pic comes up…

Holy mother, nothing about that looks enjoyable. Or smart.

I may have mentioned my fear of water? And heights? Particularly heights over water? Bridges are stupid and unnatural.

That photo is the exact thing my nightmares are made of.

I’ll be signing up as soon as I get the money together.

But this is what I mean. My brain is very pliable.

So books can be a danger.

Remember That Time A WWII Novel Made Me Panic During A Trail Race? That happened.

I sincerely struggle sometimes to differentiate between literary reality and real life reality.

So, I really should have known better than to choose a book about a family trying to cover up a hit and run accident as my reading option during SOL testing season. This time of year is already highly stressful. My brain is already in a weakened state. But let me go ahead and read a book that makes me feel like I’m running from the cops and trying to hide a crime (that I didn’t commit – I want to be clear that I haven’t actually committed a crime – it’s just my malleable mind under the influence of literature.)

There have been several evenings when I’ve left work looking over my shoulder to make sure the School Resource Officer wasn’t following me. This poses a particular issue since his office is right across the hall from mine. (Again, I have NOT committed an actual crime.) But, you know, I can’t avoid him. He’s always RIGHT THERE.

One morning I was so distracted that I forgot how to make coffee.

I actually forgot how to work the coffee maker. Like, I put the water in and put the coffee pot under the thing. But I skipped the step of putting the actual coffee ground holder thingy in so when I pushed the on button water went everywhere.

Who knew that those water spouty things actually spread the water around and don’t just drip straight through the middle?

Thankfully a co-worker walked in as I was standing there holding an empty coffee pot, mopping water up off the counter, and mumbling something about end of world and life without caffeine and just try to act normal. He asked what was wrong and I just pointed at the machine and said “broken.”

He made the coffee.

Life was kind of ok again after that.

But then our Girls on the Run/Heart and Sole Celebration 5k happened. I should have known better than to read more of this book before going. 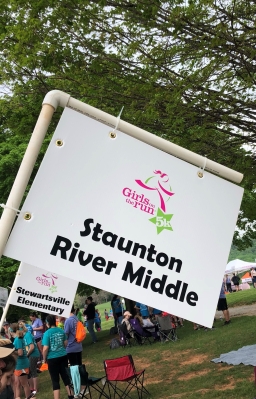 It was actually ok in the beginning. The weather turned out nice. Hot, but nice. Our girls were smiling and having fun. My Stewartsville Elementary team was there and it was a nice reunion.

We all took off at a pretty strong pace. Eventually we spread out a bit, and I worked to stay up with two of our faster girls.

And it was work. This was the first time I’d run since Blue Ridge and my Achilles were giving me a very loud, very offensive reminder that they were unhappy for the first two miles. Then they quit speaking to me at all.

Still, I was feeling ok and not at all like I was living in a world where I was trying to evade law enforcement. (Seriously. I have NOT committed a crime. Honestly, why do I have to keep saying this?)

But around the last half mile, you hit this beautiful wooded stretch. I was kind of on my own except for one girl that I didn’t know. She had just powered up a steep hill and was obviously hoping for a little walk break. But I may have gotten a little spooked by the tree lined path that seemed eerily similar to an area described in the book, so I probably sounded a little creepy when I said out loud in a pretty urgent voice, “We should keep moving.”

“Huh? Oh. No. Just, we should run now because we’re almost at the curve that takes us to the finish line and we want to look strong coming through that stretch. Not, like, we don’t want the police to catch us here at the site of the hit and run murder or something…”

No. I didn’t actually say that last part. I think I recovered well and managed to sound not creepy and totally just like a coach coaching a child on to the finish line.

And, I mean, she did start running again, so I kinda did my job there.

At any rate, I clearly need to make better reading choices.

(I say this as two of the books next to me on my to-be-read pile are “The Cellar” and “Illuminae” so obviously I’m going to read those next. This should explain any suspicious behavior on my part in the coming weeks.)

If you’re looking for a particularly anxiety-provoking book to read, check this one out.

I will say that I hated every single character in this book. Every one of them annoyed me to no end and I’m pretty sure I’d smack them upside the head if they were real life people. Which they kind of were…for the two weeks that I was reading about them.

I’m done now. Finished the book. I don’t feel any better about it, but apparently police are no longer investigating me for a crime that I DID NOT COMMIT because I feel far less anxious about napping with the windows open.