I’ve been sitting on this one for a while. I started to write it Sunday. Then I fell asleep. And I’ve been trying to catch up on that sleep since then.

I just took a three hour nap, so I should be good now. Laundry’s not getting done, but really, how funky can running clothes get? You can just reuse those, right?

Y’all need to know should you be tempted next year.

Across a very high bridge.

In 95 degree full on humid heat.

These are all things that make me sad. Or scared. Maybe a little resentful of whoever let me sign up for this.

Let me preface what is about to follow by explaining, for those of you that ignored my post about the Polar Plunge for Girls on the Run, that I am afraid of water. And also bridges. Terrified, actually.

But at some point I decided that this was the year I was going to confront my fears.

So, obviously let’s run across a very high bridge over water. Two fears at once. Obviously.

I’m not quite sure why starting an ultra at 5pm in the dead of summer in the South is a good idea to anyone. But apparently some really sadistic individual thought it would be delightful.

We were sweat-soaked as soon as we got out of the car. So that was awesome.

After some debate over distance and location of the starting line, we made our way to the red caboose. And into the shade. Where it was only 94 degrees.

So, I knew going in that this race was flat. I’m not sure I actually processed what this meant before setting out on that “trail.”

The thing about flat trails is that they never end. They go on forever. And ever.

If you’re not sure what I mean, it’s basically like this.

See that light at the end there? What happens is you think that light means something remotely interesting, like a curve in the trail or maybe hill or possibly an aid station.

It doesn’t. That light is just the runner in front of you. And in front of them is just more of the trail that never ends.

And maybe when you get to the very high bridge over the terrifying water, your running partner reminds you about your year of facing your fears and strongly insists that you follow through on that by looking over the edge. 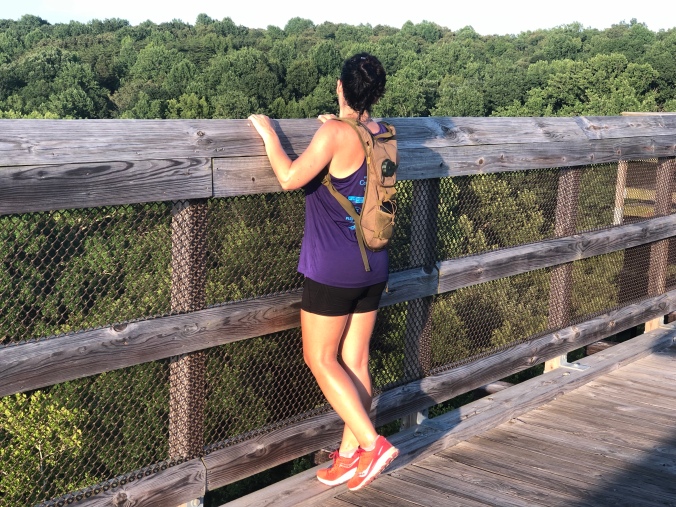 Honestly. Why am I at eye level with full grown adult trees?

I probably didn’t close my eyes and just pretend I was looking over the edge. I also probably didn’t immediately jump back from the edge and say bad words. Maybe I was completely brave and was like, psht. Water. Bridge trusses. I ain’t scared, y’all. Whatevs. It’s cool.

Just, don’t do it. Screw facing fears. If you run this race, just don’t even try to look over the side of the bridge. And definitely don’t look at the side of the bridge as you’re approaching it. Maybe just close your eyes and run full speed until you’re across. There are solid guardrails. You probably won’t run right off the edge.

And also maybe choose a running partner that will not put images of huge, heavy trains rumbling across the bridge as you’re smack in the middle of it, because clearly the history of train use has made the bridge unstable and you may very likely be that last bit of weight that completely ruins the structural integrity sending the bridge into collapse just before the earth below opens up and swallows you into it. (This is a totally plausible scenario and, thus, a completely rational fear. Seriously. Look at it.) 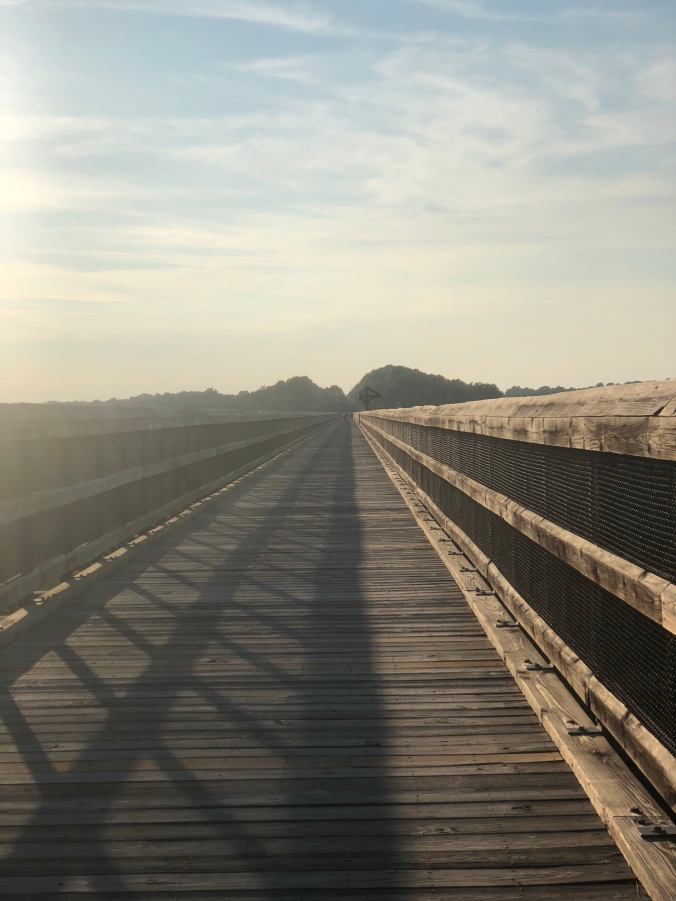 That can’t be safe.

And there may be actual hills and for real legit trails on either side of your race route and you’re gonna want to veer off course just to give your hips and knees a change in movement. But then the horse flies start attacking.

Except that those aren’t horse flies you’re swatting at. Those are hornets that you’re pissing off. And they’ve coordinated into a gang that has claimed a good three mile stretch of the trail (seriously, I saw tags on the trees) and they not just any ragtag gang. Like, they coordinated. They’ve been through flight training. Those bitches will run formations on you while they throw up gang signs and talk all kinds of shit until you get back on the other side of 8 mile.

This might also be a good time to point out that I am THE worst human to experience danger with because my response to danger is laughter. Uncontrollable laughter. I really can’t help it. I will do nothing to help you fight off the gang hornets, because I’ll be unable to function through the laughter. But if it helps, I’ve also birthed two kids and so if we happen to be running while I’m laughing at your gang hornet evasion dance, I’ll probably pee myself a little. And I’ll have to carry that pee with me for the next 15 miles. That should be sufficient consolation.

There will probably also come a point, maybe around mile 18, that your feet are just done with the running and walking and supporting you thing. At that point, you’ll begin to seriously analyze what it might take to be able to walk on your hands, and you’ll start to desperately regret not working harder in those six years of gymnastics lessons your dad paid for. And so you’ll repeatedly question your life choices and where all of your life hope went.

Luckily, my running partner was gracious enough to overlook my complete lack of support in the hornet gang fight and helped me through the last half of this flat hell through a creative use of Hamilton: The Musical. Because he’s way more considerate and way less whiny than me.

It’s over and we’re mostly recovered. And we’ve got these cool finishers award magnets that we earned.

I feel like that’s a solid reward for 32 miles of torture.

Because I have options.