Soooo, who remembers the Spartan & How North Carolina Damages Friendships? 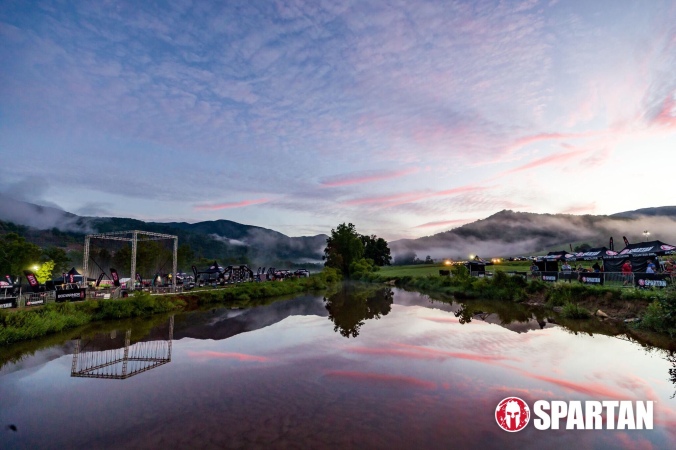 If you’ve been paying attention, you might also remember that nothing good ever comes from Kim and I visiting the state of North Carolina. Whiskey. Tango. Actual. Foxtrot. comes to mind.

But I’ll say that Ashville Spartan almost redeemed the state for us. Almost.

I do feel compelled to preface this experience by pointing out that my son didn’t make the trip with us because he has … parvo. Like, parvo. Yeah. Any of my other animal rescue friends just have a mild heart attack reading that? I’m not the only one whose concern went not to my human son, but to the puppies in their lives, right? Parvo. Weird.

Anyway, we made it safely to Ashville, though I’m not exactly sure how because Kim drives very much like Tom Cruise flies a fighter jet. When she visits a rest stop or the Subways, she goes in hot.

But we made it to the actual event thanks to Griders meeting us and four wheel driving us in. Because, like Charlotte Spartan, Ashville was just one giant mud bog. But we were kind of ok about that because it was in a quarry, so at least it was just mud. Right?

Except no. Not just mud. We weren’t even a mile in when the smell kicked in. Definitely. Not. Just. Mud.

Still, this one was actually really fun. Our affinity for mountain trails was to our benefit as we climbed up and down the mountain. Because there are always those super fit dudes that are about six hours too late for the elite start who go flying past you on unstable terrain so that one of you is gonna go down. And it’s probably not them. But then 1/2 mile up the mountain, they’re sucking wind on the side of the trail while you just stroll right on past them.

But then the downhill. So, there are some fairly significant roots on the side of that mountain. Covered in mud. And they’re spaced in such a way that you think you can just sit on your butt in between them and use them as a set of slide rails. Except that maybe you underestimate the size of your butt. And maybe you get wedged in there pretty good. And maybe Kim to your right also gets wedged in. So that you’re both holding up the quickly amassing group of Spartans behind you creating a bottleneck of sorts. So, one of you probably starts yelling out something about their ass being too big and it’s probably not you and maybe there’s talk of how your butt used to be shaped in contrast to the way it’s shaped today and …

And let me say that Kim is just mean. I think I mentioned something about looking forward to enjoying a nice dinner with all of my friends and maybe asking what everyone wanted to eat later, because I’m concerned about their needs and want them to be happy. And out of nowhere she starts yelling at me and telling everyone EVERYONE around us not to talk to me and saying really mean things about me and attacking my character and putting rules on me about not being able to talk about food until mile 7.

Let me give you another example.

So, we’re wading through creek after creek and mud bog after mud bog with random human sized holes coming out of nowhere. We hit one particularly sandpitty stretch of mud bog with Kim in front of me. I really just wanted her to move so we could get to mile 7 and I could talk about food again. She says I was yelling at her. I don’t remember that. What I DO remember is me saving her life and her complete disregard for mine.

She got stuck in the mud bog. And it began to swallow her. Whole. She was in full on panic mode. Now, it was also starting to swallow me, but sensing my friend’s danger, I selflessly sacrificed my own safety and tried to pull one of her legs free, causing mine to sink further into the mud. I mentioned that I was sinking, too. But she was screaming hysterically while I calmly try to help her out when some random giant swoops by and scoops her up, one handed, and places her safely on dry land. At which point, she took off. Like, literally hit the ground running. Leaving me to get swallowed up into the earth.

Thankfully, several pairs of hands came out of nowhere and pulled me to safety. I don’t know who you were, kind strangers, but I thank you. You understand the true meaning of Sparta.

(And yes, Danny, this totally overshadows the time I went down at Mountain Junkies Montvale and you just jumped over me as you asked if I was good. She didn’t even ask. Like, I even told her I wasn’t ok and she completely ignored me.)

And this was after I brought the cameraman to her attention during the sandbag carry so she could get a cool smiling Spartan pic. 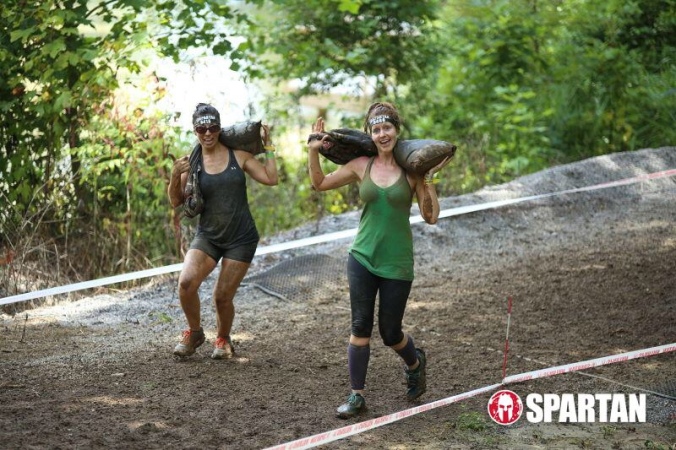 So, I somehow find the strength to continue on, trying to recapture my sense of safety. When the thunderstorm strikes. As we’re scaling to the top of a metal structure. On top of a mountain.

They cleared the folks on the lower part of the course. But apparently grasping onto a metal structure on top of a mountain in the middle of a thunderstorm is cool. No, really. Totes safe.

At any rate. Sprint and Super are done. We did  have our Beast scheduled for two weeks from now. Except that Kim has nightmares that impact everyone’s lives. So, because she had nighttime visions of my Achilles busting loose at Iron Mountain Trail Run the weekend after West Virginia Beast, we are rescheduling that to November.

Personally, I think this is just her way of trying to make up for leaving me to face my own death back in the mud bog, but whatevs. It’s kind of sweet, I guess. In a totally weird way.

I will say that the course and obstacles were fun. We only had to rock out 180 burpees, far fewer than our 300 estimate going in.

That almost outweighs the unreasonable coating of manure mud that we carried out of there and back into the state of Virginia. Fortunately for me, I left most of it in other people’s cars and showers. (People are really gonna stop wanting to hang out with me eventually, I swear.) Ruined yet another pair of running shoes. And came away with multiple scarring opportunities and a questionable rash on my thighs. And just so much manure. In so many places. It definitely shouldn’t be. Ever.

But I did get this really excellent fire jump pic out of it.

Also, the Griders are total beasts. I heard Wendy yell out, “yeah, baby!” so many times that I think I actually enjoyed the Spartan manure mud a little more. I’m gonna need them to chaperone all of our Spartan races. Especially those North Carolina ones. We shouldn’t ever be left to our own devices in North Carolina.