Or as we like to call it, Marine Corps Marathon training run.

It’s one of the six majors. Did you know that? I didn’t. I mean, I figured it out after seeing how worked up people were getting about their training plans on the Facebook page. That was fun to watch. My training consisted of a 13 mile run a few weeks ago and a 6 mile hike the week before. Good to go!

But yeah. It’s a major. So there were some major folks there.

If you’re considering running Chicago someday, and you’re NOT one of those planners, let me offer some insights. Some “tips,” if you will.

First, READ the race packet. Like, actually read and process the words in the packet. Don’t just, say, glance at a few keys words and run with them. Don’t, maybe, glance at the race expo location and see, ohhhh I don’t know, maybe the word Abbott and start telling people that you’re looking for Abbott Hall. Because six walking miles and 50 Uber dollars later, you’ll indeed find yourself at Abbott Hall with a confused and, frankly, unnecessarily judgy-looking concierge staring at you like you cray cray when you ask her where the marathon expo is. Because she don’t even know they is a marathon this weekend. She on the whole other side of the city from the marathon. And best believe that your friends who blindly followed you to Abbott Hall are going to continue to bring that mess up every other conversation and relentlessly taunt you for it. But let me ask  you, who are the real idiots here? You’ve met me. How many times have you had to keep me from taking a wrong turn on a trail that we run every damn month? I can’t be trusted to find my way in the world alone. I damn sure shouldn’t be leading a pack. Maybe next time you read that packet yourself instead of blindly following your directionally-challenged friend. You people KNOW me! 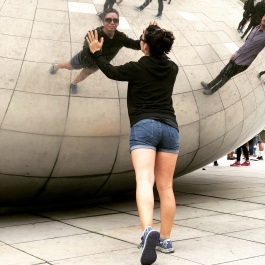 Also, probably don’t take a nine-mile walking tour of the city the day before the marathon. Go ahead and see the Bean. It’s cool, and that’s how you get your next profile pic. And if you can manage tickets, definitely go see Hamilton. Because, Lin-Manuel. And take tissues. Because, Phillip. But the rest can wait for another trip. There’s really not that much to see in Chicago and what there is to see you’ll probably see along the race course. 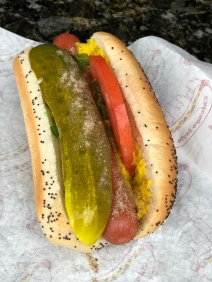 You should go ahead and try the Chicago standard foods. Chicago deep dish pizza from Lou Malnati’s is a solid choice. (Incidentally, they also have a sign that suggests that you can order some delicious fresh water straight out of Lake Michigan. If you want to do that kind of thing. I’m not really sure…) Chicago hot dog from Portillo’s is recommended. We had one from some other random hot dog stand on Michigan Ave (I think … I’m really just guessing here … it’s a street name I remember), and it was as good as a hot dog can be. Just don’t ask for ketchup. They lock yo ass up for things like that.

Also, try to eat these things well before race day. I probably don’t have to elaborate on the whys of that advice. I will, if you really need me to. But one of my readers is particularly squeamish about this topic, and I’m nothing if not considerate of others’ feelings.

But definitely carb-load before race day. Just do so carefully. Specifically, don’t try to hurdle jump into the raised booth at the pasta-nazi restaurant at top speed. You’re not Ashton Eaton. You will hurt yourself, crippling your ability to run the entire marathon. (And maybe if you’re the one that injures themself having dinner before the race, you probably shouldn’t be judging the chick that thought Abbott was a place rather than the major marathons sponsor…)

The race itself is going to be filled with different emotions. Impatience as you wait with your corral that’s at the way way back because you’re a “runner,” rather than a RUNNER. Annoyance at the little, old man that lowers his shoulder to get you out of his way just so he can jog casually in front of you. Fear as you maneuver the  wet paper cup-covered streets because some runners can’t manage to throw to the side rather than just release straight down. (They’re going for time, and that extra .028 of a second that arm movement would add is precious. This is a major, dammit.) Terror as you cross the bridge with the L-train roaring above you. (How can that possibly be safe? Why would they put a bridge on top of a bridge? That should have its own separate bridge. I’m not even sure they should be allowing cars on these bridges. There’s no need to double up.) Concern as you wait outside the medical tent while a nurse is probably telling your friend that she really shouldn’t be running a marathon on her busted knee. Pride as you watch your friend stubbornly refuse to quit despite the obvious ridiculous pain. Incredulity as said friend suggests that you run ahead and finish so you can get back to the hotel and eat, because dammit didn’t we just establish that I can’t be trusted to maneuver the city alone??? And some mix of relief and accomplishment as you cross the finish line and trudge the extra mile and a half to find your medal. (Plus, maybe a hint of superhero when they wrap that metallic blanket cape around you.)

And then there is that moment, when you stumble off of the plane (literally, because your legs aren’t going to work quite right for a while), and you find yourself surrounded by four of the most amazing people in your world. Two of the most badass, gritty chicks I’ve ever met shared this adventure with me, and we continue to build the bonds that come out of these experiences. And we were greeted by our C&C Runners leader who has endless support for all of us and my amazing, thoughtful, patient man who greeted us each with a hug and a rose. (Mine was red, though. Just so we’re clear.) These are the moments that I find myself in awe of how blessed I truly am. These are my people.

Thank you to all of you who donated to my Girls on the Run fundraiser that allowed me to not only create more magical memories with my badass people, but that also helped make sure that more than 2,500 girls will be able to participate in this life-changing (and even life-saving) program. You’re all heroes and I’m so, so thankful for each of you.

Now, on to Salem Half… Because mama needs some elevation.

One thought on “Chicago Marathoner”