You know what makes the best runs? 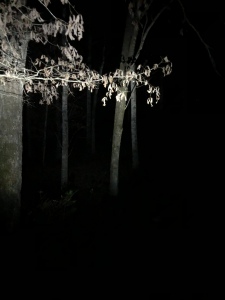 All of my running friends can just stop it. I can hear you.

But there’s magic in running in the cold, dark night. Stars shining clearly in the night sky. The eery quiet of the woods surrounding you.

My absolute favorite runs happened in the middle of the night last winter when my Blue Ridge training partners (or as I like to call them, My Psychopaths) and I would drag ourselves out of bed and meet up for a 2am run up a mountain. Or two.

We’d all pull into the parking lot and grumble about having to leave the comfort of a warm bed and why did we choose friends like this and maybe we should just grab breakfast instead.

Where are you gonna go at 2am in Roanoke? (I know. There are probably places. But that’s not the point.)

As much as we didn’t particularly want to be out in the cold at 2am, we craved these runs. Because we knew how freeing and magical they felt. And we knew that what was waiting for us at the end of 14 or 17 or 20 or 30 miles was warm sweatshirts, hot coffee, and breakfast.

So, tonight I thought, what better way to end a wonderful Christmas holiday spent with people I love than to go for a run. In the cold. At night.

While listening to an immersive thriller podcast where I am charged with getting a vital package from Inverness to Edinburgh while being chased by terrorists.

I mean, if you’re gonna be chased by terrorists, what better place than through the Scottish Highlands. Surrounded by Scottish accents. And I’m confident that this would have been far more thrilling if the streets of my neighborhood had not been filled with so many people.

Why were there so many people just chillin outside in my backwoods neighborhood at 8 o’clock at night? In the cold. On Christmas. Seriously. People shouldn’t be wandering around outside at that time of night in the middle of winter. It’s creepy.

It’s even creepier when I’m in the middle of a mission to save the world from terrorists.

Y’all know I get fully absorbed into a book. Like That Time A WWII Novel Made Me Panic During A Trail Race.

Imagine what a fully immersive story that makes me the main character does to me.

I should be the main character in every book…

Anyway, I happened upon the first couple just about the time that I was answering the voice coming from my pocket who was giving me my mission and asking if I understood.

I didn’t really understand anything that was actually happening because it’s hard to hear pocket voices talking to me over my own labored breathing.

And my breathing is fully labored these days. Remember, I’m a sloth now.

So, I was trying to tell the pocket voice all of this when I happened to pass by two ladies. I couldn’t actually see their faces, but I could feel their judgement and indecision about making a phone call to have me picked up.

Of course, being who I am, I thought that if I could greet their dog by name, it would put them at ease. That’s what a solid undercover courier would do.

That just tipped them off that I was someone they knew and kicked off this whole fact-finding mission. And I realized that I didn’t really want them to recognize me. I was on a secret mission. And now I was losing valuable intel from the pocket voice while I tried to answer their questions about my name and which house was mine and who my mom and them were without actually answering them.

First, I tried responding with nonsense words hoping it would confuse them until they lost interest.

But they were persistent.

So then I responded with breathless mumbles which I figured wouldn’t seem suspicious since I was running. Which I had started to do again. Slowly. And inconspicuously.

But by the time I’d gotten away from them, pocket voice had picked up two new companions and since I wasn’t fully present for their introductions, I have no idea who I can trust.

So, I’m obviously already drastically crippled going into this journey, and I’m only two episodes in.

But I have full confidence in my abilities to evade terrorists and identify suspicious characters.

Civilization is relying on me.

You’re all in good hands.