I wanted to see how long before someone questioned it.

No one has questioned it.

I don’t know if that means that they’re no longer feeding into my attention-seeking interested-clicking behaviors or if they just wanna let me go with it to allow natural selection play itself out.

Although, I would probably beast an axe-throwing competition.

I beat Running Partner at skee ball AND pinball Thursday night. After crawling through a trail. In the dark. And mostly not getting lost.

Photo Credit: Running Partner. Who likes to zoom in on the score. And the empty ball feed. Because he so rarely gets a W against me. It’s cute, really.

Pay no attention to the score in the pic. Running Partner probably didn’t score, like, 30,000 more points than me.

And he probably didn’t gloat about it.

And he probably didn’t actually win at pinball either…

Whatever. Let’s just say I won everything. My blog. My story.

It’s cool. I get a rematch on my home court.

So obviously when my tribe and I got to the bottom of Poor Mountain during our Holiday Hike yesterday, it was the best time to get in a 5 minute wall (tree) sit.

Because you really wanna exhaust your quads and hammies before climbing up to this view. 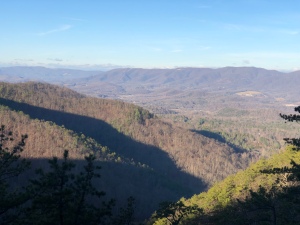 You know when sometimes you decide to do something that’s really gonna piss your body off, like run a mountain marathon twice or exist at the age of 44, and parts just stop speaking to you altogether?

That’s when you know you’re gonna pay for that shit later.

My legs stopped speaking to me pretty early on in the mountain hiking process.

But I could still hear them saying mean things about the chicks I was with. I mean, they always have mean things to say about the one with the soul-piercing blue eyes (who is apparently some form of superhero and we’re just gonna call her Rogue from now on. Because if she’s gonna be a superhero, I feel like that name is the most accurately descriptive.) But they’re usually pretty nice to the others we were with. But then they remembered about Asheville Tribe Weekend and Mount Mitchell and 6,600 feet of elevation and they realized that the rest of these chicks piss them off almost as much as Rogue does.

But it’s cool. I calmed them down with promises of breakfast foods and coffee.

We’ll see how they feel about 1,700 feet elevation in under two miles today.

I’m probably gonna have to promise more than just food and coffee.

But mountains are the best way to build leg strength.

And you need a solid base for axe- throwing…