So, before anyone tattles on me, I’m gonna go ahead and put myself out there.

There. You know now. So Running Partner can let go of that little bit of leverage he thinks he has on me.

I had shoved it over to the side hoping no one would see it.

I can’t even access my reading chair. That’s how little motivation I have to deal with it.

I’ve been trying to assess whether or not I could carry it, fully assembled, down two flights of stairs. In a house with cats. When I can barely manage to maneuver stairs while walking totally unimpeded.

Whatever. I’m still going to judge the rest of the world that still has their Christmas decorations up.

Just please no one tell my mother.

At any rate, tonight was supposed to be special. Rogue and I had received a special invitation to the elite Camp Hale. A public personalized invite, too.

But then Endong revoked our invite. I didn’t ask, but I think maybe word leaked about the whole Christmas tree situation and obviously he has standards and now I feel kinda bad for getting Rogue kicked out of Camp Hale.

Until we met up a whole hour and 45 minutes before yoga. To run. At Rogue’s suggestion. Like, should the two of us really be turned loose on the streets of an unfamiliar town alone for that long?

But apparently Endong suggested we run Wolf Park Greenway and made some ludicrous comment about me knowing where it was because I pass it every day?

I’ve run Chestnut Ridge Loop millions of times, but I still can’t be trusted to lead a damn person through there successfully.

Hell, I can barely manage to find places I visit intentionally without new directions each time. 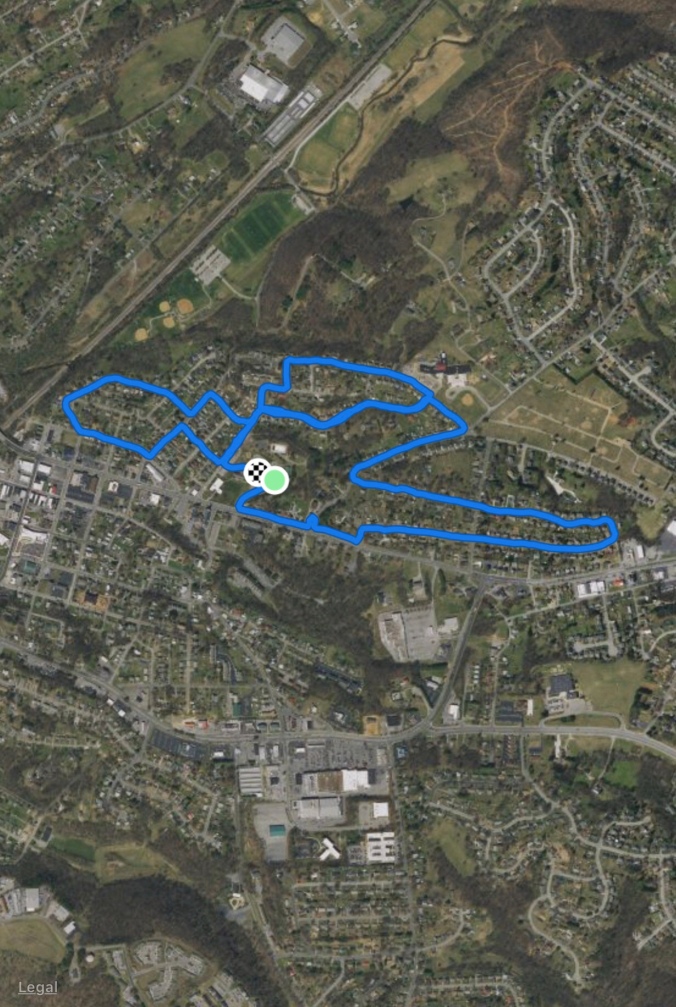 I don’t know. Does anyone see a Greenway on there? Were we even close?

Which is also a pretty accurate representation of how Rogue’s brain works.

At one point, a random dude stopped us to tell us we’re awesome and I assumed it was just because he could sense our auras but then he went into a 30 minute diatribe about New York and runners not wearing reflective gear and then he told Rogue to go stand in the middle of the road so he could show her how her pants work and so she did… go stand in the middle of the street… while a random stranger backed his truck up so he could shine his headlights on her. But the point is we are awesome and he recognized that.

But then we were out of random road options and it was freezing and we still had 45 minutes before magic yoga and Macados serves hot tea.

So we went in for tea and one of us who is not me had a random dude offer to buy her a second hot tea, so I feel like that was just an unspoken way of saying she’s awesome and I am awesome by association.

And then we ran into yoga because of course we can turn 45 minutes early into late in a heartbeat.

And it was just the two of us taking yoga with the most magical woman in the world. And she called us awesome. And she’s gonna get her own separate blog because I have a lot of feelings about Erica Austin.

But what I want everyone to take away from all of this is that Rogue and I still can’t be trusted out in the world together unsupervised. But that we’re also awesome and that should get us another invite into the elite Camp Hale.

(And I think we’re running Sandman Extreme Half Marathon on Saturday. So, we also really can’t be trusted to make good choices together unsupervised either…)