I was gonna run North Mountain with Endong and Rogue after work today.

I’ll be moving my personal belongings into my office tomorrow.

And all of the Doritos Van One Driver bought me this weekend. Because I’m spoiled. By everyone.

And maybe one or two of my cats.

So, Endong went without me.

A few blog posts ago, this would have led me to a mild freak out.

But he had to.

Drinkwater hit loops 21 and 22 yesterday while I was having brunch with my badass fitness chicks.

We can’t let him win this.

One of us has to go all in on this ugly challenge. For the crew. For the running entourage.

And by one of us, of course, I mean Endong.

I barely managed to get through Saturday’s Explore Your Limits 10k.

I did enjoy some chatty time with Rhon Rhon on Vomit Hill. Because what better place to talk about life and love, hopes and dreams, war and peace, than on a place named Vomit Hill…

I did manage my slowest time ever on that course. So, there’s something.

Of course, it didn’t help that it was 10 degrees at the start and then the sun came out and it quickly shot up to 90 degrees.

Thankfully, I have friends that are way smarter than I am. So, when I saw K-Fitz rolling her running tights into capris, I immediately copied her.

It was a solid look.

Of course, it was way better than GJB’s post-race look…

Running Partner beat my competition, but he was wearing his own damn bib this time, so his finish was useless to me. Again.

It was beautiful to watch.

Of course, even as I was marveling over the beauty of that moment, I was also yelling at Mountain Majestic Walters. Because I’m poor.

Yeah, I can’t explain me to you.

I get a little histrionic sometimes.

Shortly before I made that spectacle, I caught a group of people looking at me. And pointing. Initially, I thought they must have recognized me from my blog. Because this is how I’m gonna get famous.

Turns out, they were pointing at the sweatshirt I was wearing. My Whiskey Tango Actual Foxtrot trail half marathon sweatshirt.

I still need more therapy after that experience.

Their judgement was obvious.

The culmination of the day, however, was to come in the form of Endong’s podium stand.

Because his age group is ridiculous.

But he managed to place, because he’s also ridiculous.

as someone tried to figure out where the male half of Corkwalker finished in the race and if it might have impacted race results. Since he’d decided to strip down mid-race. Shedding his race bib along with his clothes. As though he’d never run a race before.

So much of the planning excitement had worn down by the time Endong’s name was finally called. But still. Rogue, Lil T, and I cheered him up onto the podium. Like the running entourage we are. 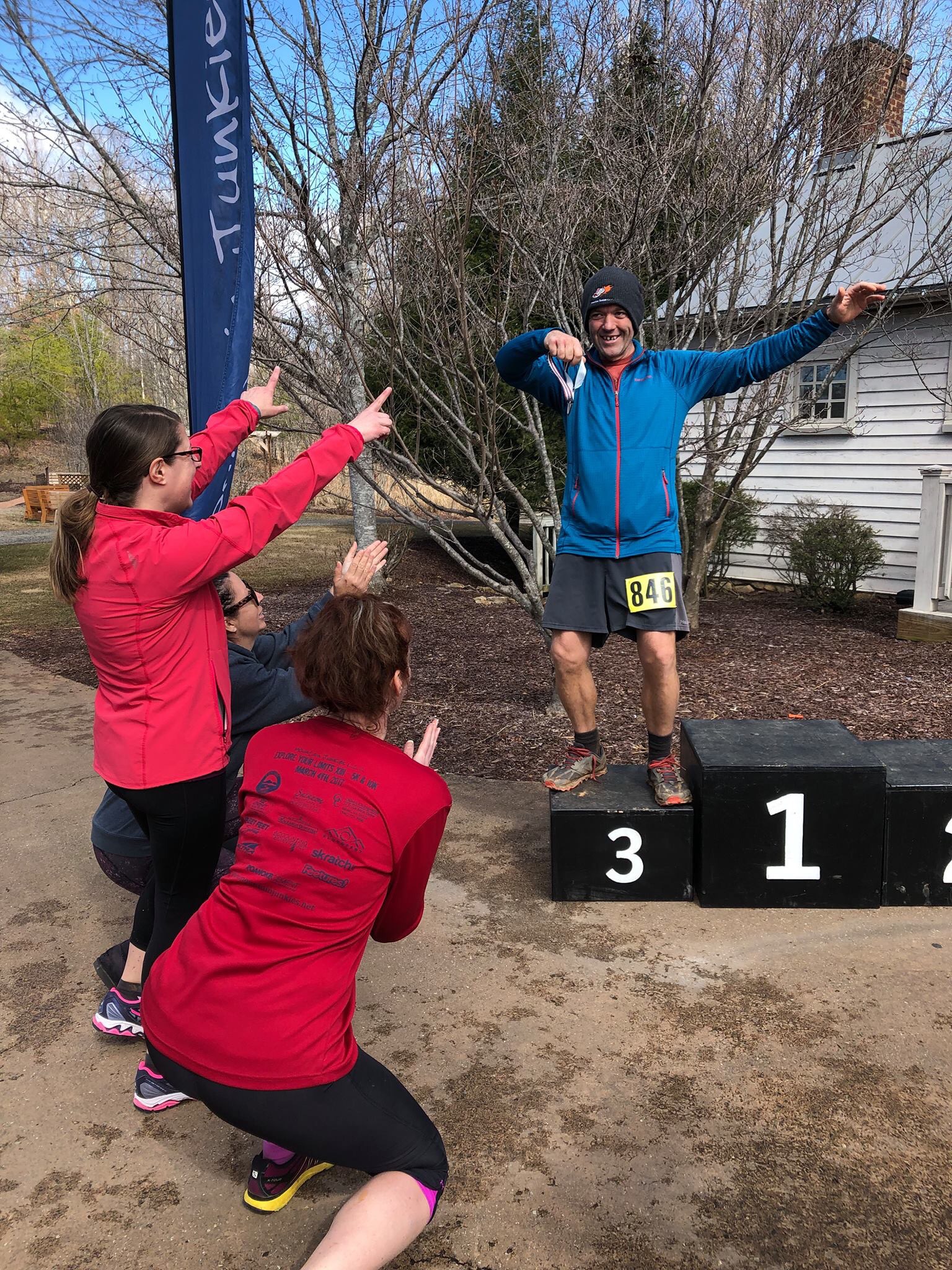 And now I expect that treatment anytime any of us make it onto the podium.

Because a running entourage is the best entourage.

Now, if you need me, I’ll be packing my bags for SOL testing season. And trying to convince my SOL entourage to cheer me into the testing labs like that every morning…