I’ve been reading about myself lately. 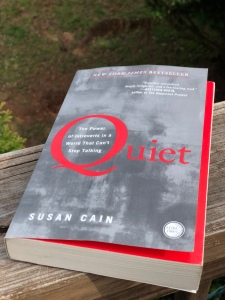 I need down time.

I can become a pretty awful human if I’m forced to people too much for too long without any down time.

I will go into full shut down mode right in the middle of a conversation. It seriously just hits out of nowhere. I’ll be happily chatting along to a work colleague or some random person at a social event and then my social allotment just expires and I full on shut down and walk away.

I’ll straight up leave a social function without so much as a wave goodbye.

And some of my jobs involve working with excessive talkers. People that I generally like to engage with and have deep conversations with. But if my social isn’t sufficiently replenished before these interactions, my eyes will glaze over and I’ll escape inside my own head. Until they’re done talking. And then I’ll escape to the bathroom. For as long as seems possible without getting fired.

One of my jobs has those automatic toilets. Those things will flush on you if you’ve remained stationary for too long. So sometimes when I’m in hideout mode, I’ll sit in there for a good three flushes. Four if the kids are also having super bad drama days.

Because these kids have legit super bad drama days. Not like my super bad drama late on the bills, another college tuition payment, struggling to get my car inspected, can’t afford new running shoes days. But like gunshot wound, eviction notice, mama getting locked up super bad drama days. I can’t just shut down on them. I’ve got to see that shit through before I can shut down. But you best believe I’m hustling to the bathroom for a four-flush escape before a co-worker strikes up a conversation.

And to be clear, these are not four-flush bathroom escapes because I’m pooping. Not that there’s anything wrong with that. Just. I thought I should be clear.

Except probably if you’re pooping so much in a single sitting that you require four flushes, there’s probably something very very wrong there. You should probably get that checked out.

Anyway, I need introvert down time so I can look forward to those conversations.

So my plan for Sunday was to hibernate. Books. Coffee. Sweatpants. Quiet…

But then Momma Goose messaged me Saturday night about hitting up a mountain Sunday morning.

Which led to a solid 15 minute discussion over where to park. Because I thought we were talking about Roanoke Mountain and she thought we were talking about North Mountain and I was concerned about the distance she was trying to get in by parking at Dragon’s Tooth and running all the way to Roanoke Mountain. But I’m also not known for knowing how trails and roads and mountains work, so I was reluctant to question it. But I also know what a badass the entire Goose family is, so I needed to know exactly what I was committing to. So I could plan my snacks.

Because people apparently think that the way to get me out on a mountain is to take me to North Mountain.

I am associated with Roanoke’s ugliest, crappiest, unhappiest mountain…

That’s good for the ole self-image.

Whatever. Anyway, I won’t give up my introvert hibernation recharging days for just anyone.

But Momma Goose is special.

I mean, she’s a total positivity-filled badass. But she also totally gets my introversion.

She gets the complete beauty of being out on the world’s ugliest mountain suffering through relentless switchbacks and rock gardens of death with another human that is totally accepting of exactly who you are.

Plus she brought this adorable little man along.

Imma be real. The big dog mom in me might have doubted his abilities at first.

I think he sensed it.

Dogs are way smarter than me. And all people.

Because his happy little behind took off up that ugly ass mountain like he was just strolling to the mailbox.

There were a few moments where I tried to take his leash from Momma Goose so little man could pull me up the mountain for a little while.

It’s odd how much it forces you to work through your stress. Issues. Struggles.

Although, I will say that I was way more out of breath while working through my stress than Momma Goose was.

What the hell? She’s not even breathing hard!

That’s what I was thinking. I didn’t actually verbalize it. Because I couldn’t. Because oxygen.

Anyone else and I’d have been resentful. But she’s one of those people that you can’t possibly resent. You can be jealous of her, which I totes am. But you just can’t resent her.

So, that three hours on the mountain turned out to be just as rejuvenating as my planned introvert hibernation day would have been.

I didn’t even lose it a little bit when I saw the 5,000,000 cars that had descended on Dragon’s Tooth parking lot and out onto 311 in the time we were out there.

And now I’m fully ready for all of my jobs this week. I’m gonna be super pleasant. And social.

Until at least Tuesday…

Oh, and in case you’re not counting and tracking my every move, that’s Loop #10 of that damn North Mountain Challenge. Double digits. I think we can all be done now.