It wasn’t out 3 hours ago when I was climbing to the top of a mountain .

Do you know what was out?

We’d planned this Banquet of Friendship trip to Christmas Mountain weeks ago. And at the Blue Ridge yesterday, GJB reaffirmed commitment from his core group.

There was no cancelling this event for weather.

Even though we couldn’t see the actual mountain as we started out.

I did send a frantic text to my mom when the tornado alerts started coming in asking her to make sure the basement was open for my cats and dogs.

Because I’ve practiced tornado drills with them and they know what to do. Punky ‘s in charge on paper. Because she claims all leadership roles in our house. But Lobo’s in charge in practice. Because he’s the only one who has any sense and won’t try to lock the other animals out of the house in the middle of a natural disaster.

But we didn’t cancel our climb.

Lil’ T and the Tiny Brazilian took a pre-Hike photo of all of us. So the rescue crew would have something to work with.

Then we headed out with our tour guide, Brown Dog. 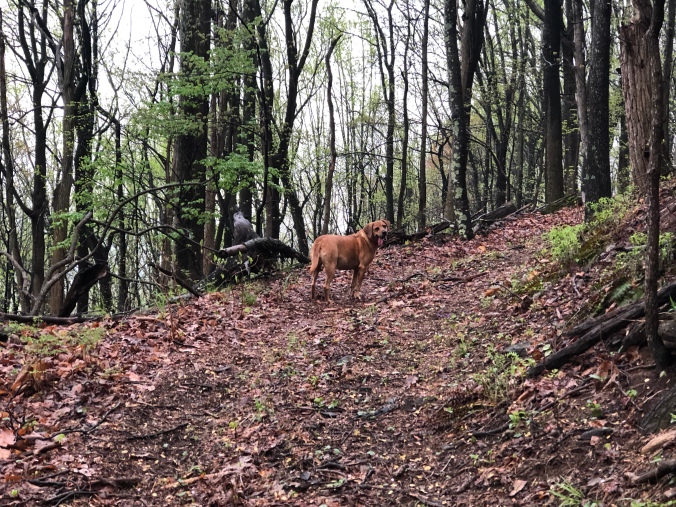 Twelve people gathered for the pre-hike pic, and not a single one suggested we not go when the tornado alerts started sounding. Repeatedly.

Twelve people set out on the trail to Christmas Mountain, and not a single person suggested turning back when the thunder started rolling.

Twelve people climbed up Christmas Mountain, and not a single person suggested we stop and find cover when the lightening flashed in the sky.

We are the reason rescue crews have such stressful jobs.

and every single one of them said it was time to leave when the skies opened up completely and the monsoons hit.

Well, not every single one of us. There was one person who wanted to just chill up there for a while.

Have I mentioned Endong before?

But the rest of us were cold, wet, and hungry. We wanted food and dry sweatpants.

Which is why what happened next happened.

Because when you send twelve people onto a mountain, some are going to move faster than others.

Some are going to be so hungry they just roll on full speed ahead.

And maybe the ones that are moving faster should probably know better than to allow me out front. I’m never ever in front because I know where I’m going. I’m almost always in front because I’m trying to be closer to where the food is.

So it’s not really my fault.

Rogue’s gonna claim that she said we were going off course.

But did she stop us and put someone else in charge of leading? Nope.

She just kept following along as I led us a good 1/2 mile off course. As I led us through back country yards. As I led us to the abandoned moonshine still.

And then. Finally. She stopped me and made us all turn around.

We retraced our steps and finally hit the backyard of a house that is definitely not one that we walk by on the way up. But we saw GJB and the others down below. And one of us started yelling for them to wait.

One of us was not me. Or Rogue.

We were very aware that we were trespassing and we’ve met us. We know the shit shows we can create just from being in proximity of one another. If anyone’s gonna get shot at for trespassing in back country Virginia, it’s us. So we just took off running. Like children. That had just tp’d a house. (Is that still a thing?)

And we rolled our filthy rain-soaked selves right up into Lil’ T’s house where she and Tiny Brazilian threw towels at us and guided us towards bathrooms to put on dry clothes, because folks like K-Rob-D will just strip down in front of anyone.

It was an insanely phenomenal weekend. Ridiculousness like this is exactly what we crave in our adventures. And when you finally get home to a hot shower, fresh coffee, and cozy sweatpants, you appreciate the little things that much more.

I love these psychopaths.

Because when they hear that monsoons and tornados are on tap for a mountain hike we’ve planned, their only response is, “Well, that will just make it more epic! Let’s roll!”

4 thoughts on “Monsoon on the Mountain”