The best cure for illness is running.

Or how about this. The best cure for the vampire parasite is mountain running.

Because by climbing up 3,000 feet, you’re closer to the sun. Thus exposing the parasite to the very thing that destroys it.

I do know that I canceled every fun fitness activity last week due to this ickness. But I wasn’t about to cancel the highlight adventure of the week.

When all your friends are POOing, you don’t want to miss out on that.

Friday night, I was casually chatting with Rogue and Fall Risk about the illegal drug habits of roaches and trying to explain to Fall Risk how randomly Rogue’s brain works, when my chest suddenly filled with mucous and my body began coughing uncontrollably trying to expel it. I could hear an unmistakable death rattle every time I inhaled.

I started googling my symptoms and whining frantically to Rogue and Fall Risk.

They demonstrated the level of compassion you’d expect them to and finally settled me down to over-medicate until I passed out.

So when my alarm went off a 4am, there was a brief moment where I considered just staying right the hell where I was.

Hacking the mucous up out of my chest.

But FOMO is a far stronger motivator for me than comfort.

Picked up K-Rob and Finn’s Dad. Who brought coffee. For himself. And then proceeded to whine about how hot it was. So he didn’t even drink it. Or offer it to anyone else.

Pulled into the POO center. Where every other car promptly moved to the way other side of the parking lot from mine.

Luckily my car is way less sensitive about that shit than I am. So I left her where she was sitting and walked myself down to the other cars. 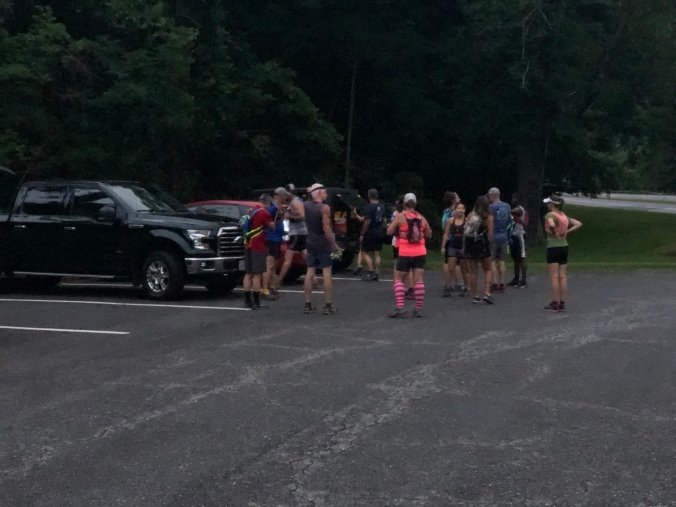 AD spent several minutes giving us an overview of the route.

At one point, she said, “It’s impossible to get lost.”

Which really just felt like a hold my beer moment.

So I started taking notes.

Because if I got separated from the group, those notes were totally gonna get me where I needed to be.

Then we set off.

Which is a decent challenge for a fit adult with fully functioning and endurance-conditioned lungs.

And Beautiful Beastie was feeling it this morning. Homegirl took off in a jaunt. She was bouncing up that mountain.

And apparently Rogue was feeling it, too, because she took off right behind her.

With all of the time I have been putting into HIIT work at PlayFITStayFIT, I was working my way into the moderate group. But vampirism is real, and its effects left me struggling to even maintain myself in the normal human but still totally badass because at least they’re out there doing epic shit even if it’s way slower than the other freaks of nature on this mountain group.

I was barely managing to stay ahead of the self-appointed sweeper of our group. (Because Everyone’s Favorite Husband is more concerned with the welfare of others than himself on these adventures and he knows that one of us is bound to do something stupid requiring his assistance.)

I kept making GJB and AD stop for breathing breaks.

Mostly because if I didn’t cross my legs when I coughed, I’d pee a little. Because I’m 44. And I’ve pushed two entire humans out. And when I hit those really forceful coughing fits, I’d pee a lot.

Except I’m pretty sure it was only 2.6 minutes each time.

Jesus bless the beautiful human that put those there.

The Beast Family kept saying we weren’t near the top until we could see the house.

The house ended up being the exact place I first experienced the totally appropriate and completely legal nighttime activities of Irish youth during the year I lived in Ireland. Not sure how they transported it all the way over to the Americas, but it was cool to see it again.

I had a brief flood of relief from reaching the top. Until I saw Rogue standing on the edge waiting for K-Rob or Beautiful Beastie or some other completely irresponsible adult to take her picture.

I would show you a photo of exactly how precarious her life was in that moment, but I was just struggling to stay upright on top of the mountain 4,000 feet off the ground. And trying to summon up my best mom voice to get her down. But in my weakened state, no middle name was coming to me. So I only had the power of a first and last. And every mom knows you have to have a middle in there to get a child to listen.

That’s the other mountain we were heading over to.

So you can see that if we were almost eye level with that peak, then we were way too high for anyone to be standing on any damn ledges.

Which basically means she has to work inside all day while everyone else is out paddle boarding and yoga-ing and just enjoying life.

I hope she’s learned her lesson…

We absolutely did not run down the bus road to the bottom. Because it’s quicker. And less rocky. And, I mean, even if we had, it was way before the time for the bus to drive people up there.

There is a bus to drive people up there…

Why did I just experience dizziness and shortness of breath for a mile and a half…?

Back at sea level, I was contemplating just napping in my car while everyone else headed on over to Flat Top.

Rogue said I looked awfully pale for a woman of color.

And while I appreciate all of the compliments they were throwing at me in support of a nap, I also didn’t want to miss out on the rest of the adventure. Seriously. My FOMO is strong.

Rogue assured me that she’d gotten her ridiculous out of her system and would be moving at a normal human but still totally badass because at least they’re out there doing epic shit even if it’s way slower than the other freaks of nature on this mountain group pace the rest of the way.

And, of course, Everyone’s Favorite Husband was willing to continue to monitor everyone’s safety from the sweeping position.

So I continued on. With everyone.

On to Flat Top.

Like, why that name? Why not something accurate like Sharp Top Only Way Worse? Who is in charge of naming mountains? Who do I talk to about this?

I was coughing less at this point. Which meant less peeing. So that was good.

I’m not sure I was any less whiny. Because breathing was still a struggle.

Everyone’s Favorite Husband checked in on me halfway up. “You ok, Sunshine?”

GJB checked in on me shortly after that. “You ok, Sunshine?”

One of those individuals was fully sincere in his concern.

The other was only allowing me 1 minute break intervals.

Once we finally made it to the top, we wandered around looking for the view. 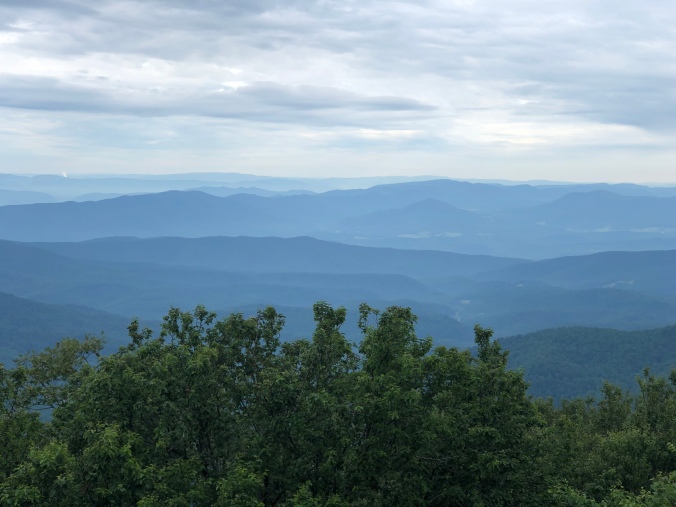 After our group photo op, someone found some lipstick rolling around.

And someone thought it might be mine? Beeeecause I always make such a strong effort to look nice? Especially on the trail?

Then someone suggested that maybe it was a gift from God.

Like, God took a good look at us trail chicks and was like, “No really, you need this. Make an effort. For the love of Me, just try to act like you’re trying. Especially you, the one that keeps peeing in her pants and blowing her nose on the front of her shirt. Can you at least pretend like you care?”

I promise I’ll bathe when I get home.

Now, we were told that the descent back to the “cute lollipop route” would be fun, runable, rolling trail once we got past the rocky part.

Where have I heard that before…

Oh yeah. That time when I Found My Limit On A Mountain and Dude With The Disarming And Charming Smile told us the last several miles of that bullshit was gentle rolling, runable hills.

And neither was this.

I mean, not as bad as Iron Mountain.

Rogue went down. I didn’t see it. But I could tell from the dirt on her shoulders and the gaping hole in her water bottle. I bet it was glorious.

Ack Ack injured her ankle or glute or something. I didn’t see it. But I could tell the way people were throwing bags of ice on her and leaving her sitting while we continued onto the “cute lollipop” portion of the route over to the waterfall.

I mean, there was water kind of falling… 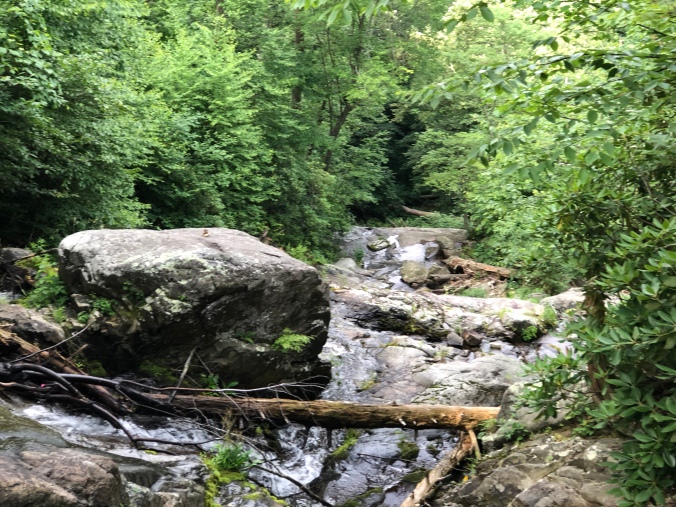 And we stopped long enough for some sassy pictures. On the ground. Where it’s safe. Rogue.

Look at me. You can’t even tell I’m in the process of transforming into a vampiress.

But we didn’t even get to take our shoes off and cool off in the waterfall.

Before the ridiculous group forced us to continue on.

Finn’s Dad and I had a brief moment of hope when we thought we might be running towards a keg party based on the frat boy chanting sounds we heard from somewhere on the “cute lollipop,” but we never found them.

Instead we found this.

The two mile stretch of Parkway that would take us back to our cars.

And there is a very real moment when you’re making your feet run on the asphalt. In trail shoes. Where you sincerely consider turning around and running the 13 mile mountain route you just did backwards back to your car. Because freakin roads, man.

But then you remember the breathing struggles. And all the cough-pee. And that you’re running out of dry spots on your shirt to blow your nose. (Dammit. Hand me the freakin God lipstick. I need something.)

So we trudged our grimy behinds on over the Parkway back to our cars.

K-Rob, Beautiful Beastie, and Skratch wanted to get in those last 4 miles of Harkening Hill.

So we let them.

Because of the carpooling, there was some concern over how long it would take. But Rogue was the only one on a schedule and she’d brought Skratch and have you met dude? Seriously. He can do that route in under 30.I believe someone referred to him as the “Sleeper Hit of the Summer.”

But apparently they were reluctant to run past a mama bear and her cub.

I mean, they were almost at the top.

Who ditches a run that close to completion?

So they turned around and came back down the mountain.

Where GJB was yet again faced with the fact that, no matter how much time he spends in the mountains, he will never, ever get to see a bear in real life.

And while my head and chest are in full revolt this morning (my vampire transformation is apparently kicking into high gear), I’m so so grateful that I didn’t miss out on our POO adventure yesterday.

Now if you need me, I’ll be doing laundry. Do you think I need to wash my pee pants and mucous shirt separately? Or can I throw those in with my regular work clothes?