So GJB and I spent the day yesterday trying to peer pressure Rogue into just walking out of her work meeting and going running with us. She wasn’t learning anything in there, anyway. And Endong that his child is old enough to manage back to school night on his own. I mean, by the time they hit double digits they’ve really learned all they’re going to learn.

We needed them more.

They’re the only ones that will jump on board ridiculousness without questioning anything. Except maybe who’s bringing beer. And snacks.

But in the end, they left us to our own devices.

We tried to convince the other Shine Runners that burpees and push ups every half mile are a fun way to spend a summer run.

They don’t even pay attention to us when we say that anymore.

But SCT was paying attention to GJB as he was trying to convince him to shave his beard off.

Because he seems to think he knows what women want.

He’s lucky he tricked Little T into marrying him before she realized what she was doing.

Almost had to beat Everyone’s Favorite Husband down during the pre-run pic. Because he said we weren’t gangsta.

Seriously. Please don’t question it. I have no interest in trying to prove it.

I got my ass kicked way too much in high school.

Let me just have this one thing.

Then we all just kind of stood around in the parking lot looking at one another. Like maybe if we stalled long enough, the heat and humidity might dissipate.

So I took control like I always do. And led us on our way.

There’s a stretch of what may have once been a road-like area along some train tracks before you get to the trail.

Someone’s been doing some…maybe work? Maybe it’s work? Along this road-like area. Like, maybe they had some extra asphalt, but not enough to actually pave with. So they just took some bucketfuls and threw some around in random spots. And let it form whatever shape it wanted.

So the result is little mounds of rodent-sized asphalt ski moguls every twenty feet or so.

Which confuses your legs.

That should absolutely only be worn on trails.

So by the end of this stretch of road-like area, your shins are like, “WTF, dude. Just do what you want. We’re not even gonna argue with you anymore.”

And then GJB and I hit that first set of push ups and burpees.

And they felt good.

And everyone else just ran right on by.

About halfway through, K-Rob-D kind of joined in. By assisting GJB with his push ups. Until he started whining. Like a spoiled child.

I swear Little T indulges him too much.

Eventually we hit the kudzu forest. 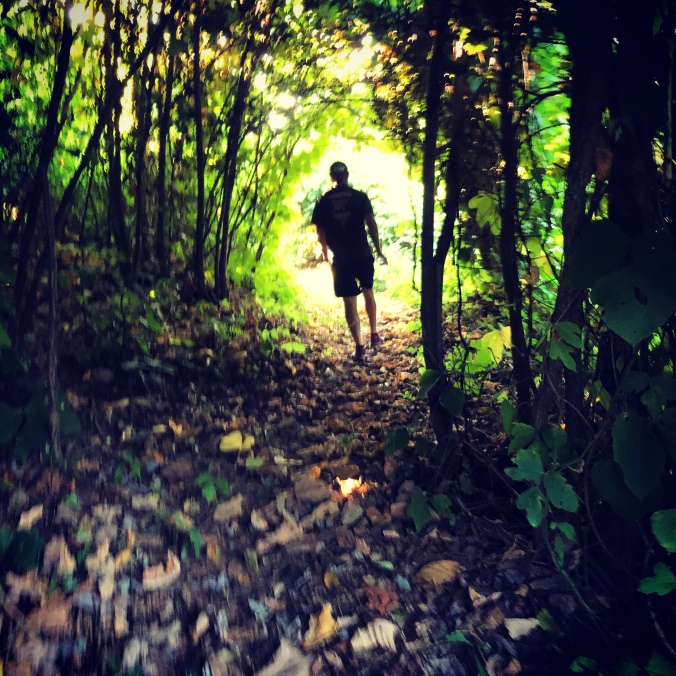 And it’s kind of magical pretty.

But don’t linger on the view.

Because as Franklin County Moonshine was cutting out a path, he was also laying thousands of kudzu trip wires.

And even if your legs have started being happy again because they’re on the trail and not the road-like area now, and you convince them to work with you and high step through this section, the kudzu trip wires will actually reach up off of the ground and grab your ankles.

It’s really as impressive as it is creepy and obnoxious.

The key to surviving this section is lots of cursing.

Just keep yelling out, “What the fuck?” and you’ll be ok.

And eventually make it back to the road-like section.

And GJB will suggest the extra run up to the church.

But that means more road. Up.

And you feel like you can talk to Jesus just fine down where you are.

So we got our last set of pushups and burpees/squats in and crawled on back to Hammer & Forge.

“Remember when we used to race back to our cars? Why don’t we do that anymore? Are we just old now?”

Ummmmm, I was racing…

Look. We live on the face of the sun now. This is what me sprinting looks like.

Don’t make me have to beat you down, GJB.

And because I’ve been whining about lack of adventures this month, we spent post-run beers planning some weekend mini-adventures and talking about Iron Mountain.

I assume in my honor.

It will be the last day of my birth month.

I’m bringing the rice and beans.

Except puertorriqueno style instead of mexicano.

Because we’re gonna be closer to the border down there. And I’m not taking any chances.