I had intentions of cleaning my house real good. Doing some reading. Maybe even finding a barbecue to go to after getting back from Iron Mountain.

But since no one invited me to a barbecue, I spent the weekend on mountains instead.

Because the best place to go in Roanoke. On a holiday. At noon. Is McAfee Knob.

But I wasn’t leaving Damascus until Sunday morning. So I made Fall Risk wait until I got to Roanoke at noon to go on her redemption hike.

Because she’s not allowed to go on trails unsupervised.

And obviously I’m the most responsible one in our group. So…

Ok. Rogue was supposed to go with us. But she’s Rogue. And is required to split her time between 86 people and several jobs. And thus had other plans. So she left Fall Risk’s safety entirely in my hands.

So, I led her slowly, cautiously up the mountain. Along with 5,386 other people. From everywhere. Like Pennsylvania and North Carolina don’t have their own damn mountains.

Every little sound of moving rock or breaking stick led me to spin around and check that she was still fully intact.

Because she’s Fall Risk. For a reason.

You know, you learn some things about yourself on a mountain. On Sunday I learned that I can swallow my hunger whines in favor of caring for another human.

I had a mouthful of gourmet breakfast egg before leaving Damascus that morning, so I was hiking that mountain on an empty stomach.

And when we got to the top and Fall Risk offered me a granola bar, I took it. And ate it. And didn’t tell her to fuck off.

(It felt weird to me, too. But this hike was momentous, so I was working really hard to keep my shit together.)

If you’re unfamiliar with McAfee, the trail is pretty bitchy. Lots of rocks and roots. And climbing. 1,700 feet of climbing. When we got to one of the rare smooth, flat parts about two miles in, she says, “So this isn’t bad. Is the worst over maybe?”

And the trail answered her immediately and clearly.

Because the last mile is, as I’ve explained before, straight the fuck up. Over some really bullshit rocks.

And so here’s the other thing I learned about myself. I am fully capable, when bouncy little college kids are making their way down telling me “you’re almost there,” of not getting all holier than thou and responding, “Sweetie, it’s not my first time.”

Because that’s my instinct.

Like the time someone said, as a well-intentioned compliment, “Well, you run half marathons and shit.”

Look at me being all humble and shit.

Because my girl was in some pain.

She hadn’t been on this mountain since it broke both of her ankles last Labor Day Weekend.

She’d never been to the summit.

She’d never had a McAfee profile pic. Which I’m pretty sure is a requirement for all Roanoke residents…?

And on Sunday, she made that mountain her bitch.

So I was being as pleasant as fucking possible.

After mandatory summit photos and a little rest time, I made her get up to head back down. Because her ankle was just gonna get worse if she rested it for too long.

As we headed back to the trail, she said, “I can’t wait to tell every fucking person we pass that they’re almost there.”

This is why I love her.

And while the climb up was bad, the descent had to be twice as painful for her. I could see her ankle swelling up under her brace. And even though I let her take the bitch ass fire road back down, it wasn’t any better than the trail. Because that’s about the ugliest damn fire road in the area.

On the way down she made it very clear that she would never, ever be climbing this mountain again.

Because that’s exactly what Rogue and I have said. At the end of North Mountain. All 13 times.

Because this morning I ended up back over there at 5am with Tiny Brazilian and OT.

For a sunrise hike.

And she’s seen the pics.

She’s gonna wanna do that.

Because it was still dark as we headed up. And we were with OT. This hike was not slow and cautious. There were some points where we may as well have been running for how hard I was breathing.

But we needed to catch the sunrise.

And I had somehow ended up in the lead…

So they shouldn’t have been surprised when I led them right on off the trail and into the shelter area. Which we circled for a bit. Until I managed to catch sight of the trail again.

In my defense, your chest has to be pointed in a very specific direction when a chest lamp is your only source of light. And I try real hard not to lead with my chest.

Now, most of the out of staters Fall Risk and I had seen Sunday were still there.

So, when we got to the top of McAfee, and saw all of the people waiting for the sunrise, OT said “follow me.”

And while we always quietly question OT. We also always just follow OT.

I just do what he says.

He says, “You up for some burpees?” And I burpee.

There was a moment of terror when he led us onto the back trail and said,”Ok. Now we go over to 220.”

Because it is not outside the realm of possibility for him to just decide to add another 15 miles onto a morning run.

And I’d left my pack back on the overlook.

But then he took us around to the underside of the rocks. 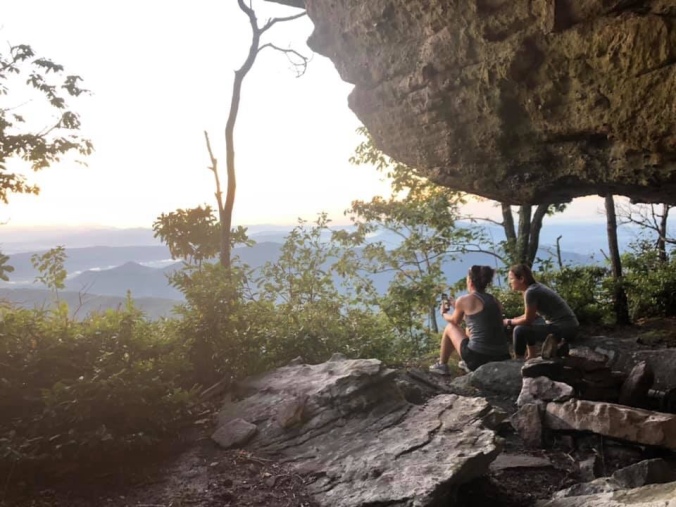 And then over a little further. 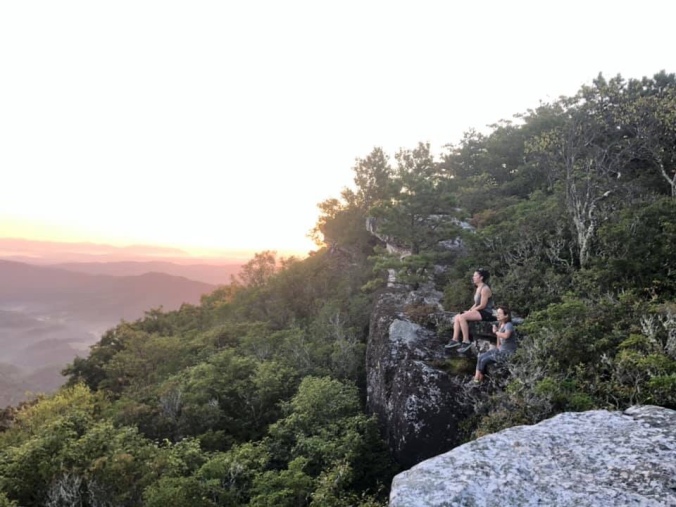 And it was perfect.

There was a moment where my mom voice was just quietly repeating his name in my head.

As he did this. 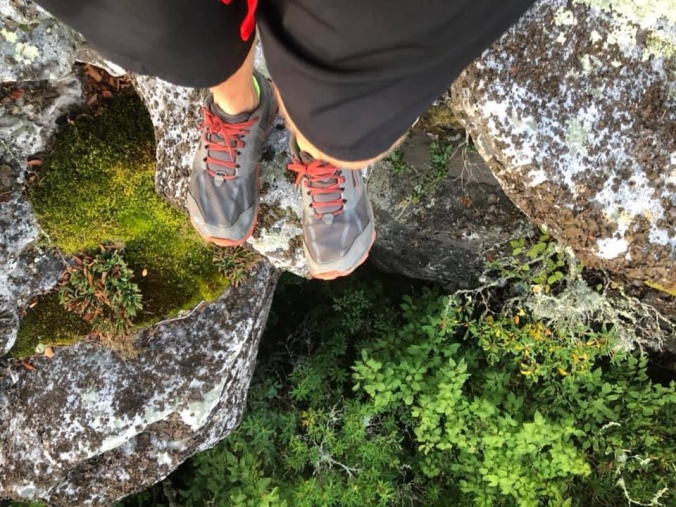 And he heard it. He knows. He wouldn’t even look at me.

(It is a pretty sweet pic, though.)

And as the sun rose, the three of us just sat there, away from the crowd up top, acknowledging that this. This is everything. The mountains. The sunrise. The people making the climb with you. The whatever comes after, we started our day exactly the right way.

If you haven’t. You must. 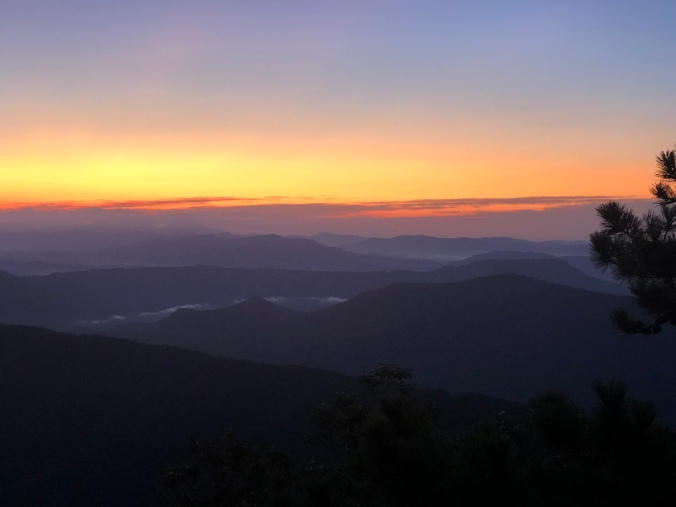 isn’t even close to the real thing.

they for damn sure are.

One thought on “The Real Thing”